ROME, Italy — Pro-Ukrainian protests erupted across the world on Saturday, as thousands of people took to the streets from London to New York to Tehran to denounce Russia’s aggression against its neighbor.

The invasion of Moscow sparked a global outcry and resulted in punitive sanctions from the West, some directed at Russian President Vladimir Putin himself.

On Saturday, rallies took place in cities around the world to join the chorus of condemnation and urge an end to the bloodshed.

In Switzerland, thousands of people gathered across the country, including around 1,000 outside the European headquarters of the United Nations in Geneva.

Protesters dressed in Ukraine’s national colors of blue and yellow flocked to the ‘Broken Chair’, a large sculpture symbolizing civilian victims of war.

Protesters have demanded tougher actions from the government, which has so far avoided imposing tough measures, opting instead to stick to its traditional “neutral” stance.

Russians based in Switzerland joined them to show their opposition to the war, holding up signs reading “I am Russian”.

More than 3,000 people gathered in the French city of Strasbourg, headquarters of the Council of Europe human rights organisation, carrying signs calling Putin a killer and calling for an end to the fighting.

“Putin and all his clique will have to pay the price for this aggression and face an international court,” declared Borys Tarasyuk, permanent representative of Ukraine to the Council of Europe.

In France, there were demonstrations in Paris, Montpellier and Marseille.

Demonstrators wave Ukrainian flags to show their support for Ukraine during a ‘We Stand with Ukraine’ demonstration in Helsinki, Finland, on February 26, 2022. (Jussi Nukari/Lehtikuva/AFP)

In Russia’s neighboring Finland, thousands gathered in the capital Helsinki shouting “Down with Russia, down with Putin!”

About 3,000 people gathered in Vienna, with homemade placards bearing slogans such as “Stop the War” and speeches from the Austrian Ukrainian community.

More than 1,000 demonstrators responded to the call of trade unions and NGOs in central Rome, huddled around a podium marked “Against the war”.

Thousands of people had taken part in a torchlight procession to the Colosseum, one of the main monuments of the Italian capital, on Friday evening.

Putin was the main target of the march as banners caricatured him as an assassin with bloodstained hands and compared him to Nazi dictator Adolf Hitler with the words: “Can you recognize when history is repeating itself?”

“We have always been close to the Ukrainian people,” Maria Sergi, a 40-year-old Italian of Russian origin, told AFP. “Our sense of helplessness is enormous.”

About a thousand anti-war protesters turned out in Barcelona on Saturday, local police said.

Dimitri, a Russian designer living in Barcelona, ​​said he feared the sanctions would set back Russia’s development.

In Britain, hundreds of protesters marched towards the Russian Embassy in London, some defacing a road sign called “St. Petersburgh Place” in front of the embassy with fake blood. 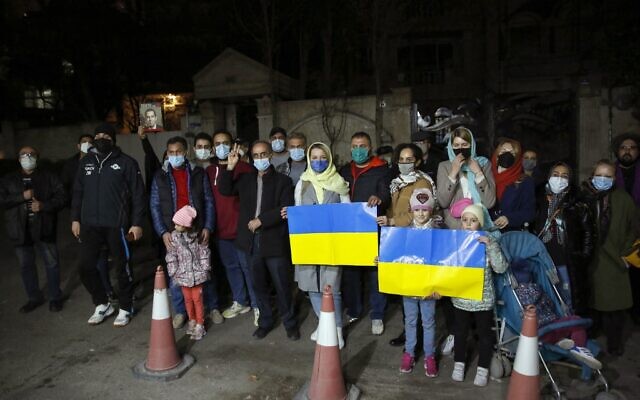 Iranians and Ukrainians gather outside the Ukrainian embassy in Tehran to show their support for Kiev and protest against the Russian invasion, on February 26, 2022. (Photo by AFP)

And about fifty people in Tehran gathered by the Kiev embassy in Iran, noted an AFP correspondent, some holding candles and Ukrainian flags and chanting against the war and Putin. 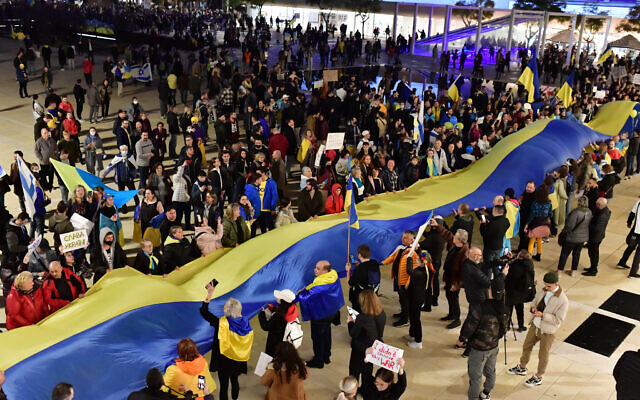 Demonstrators hold signs and flags during a protest march against the Russian invasion of Ukraine, in Tel Aviv on February 26, 2022. (Tomer Neuberg/Flash90)

In Georgia, nearly 30,000 people took to the streets of Tbilisi on Friday evening, waving Ukrainian and Georgian flags and singing the national anthems of both countries.

Russia’s attack on Ukraine resonates strongly in Georgia, another Soviet republic that suffered a devastating Russian invasion in 2008.

“We have sympathy for the Ukrainians, perhaps more than other countries, because we have suffered the barbaric aggression of Russia on our soil,” Niko Tvauri, a taxi driver from the city, told AFP. 32 years old.

Teacher Meri Tordia added: “Ukraine is bleeding, the world is watching and talking about sanctions that won’t stop Putin.

More than 2,000 protesters gathered outside the Russian embassy in Athens, the Greek capital, on Friday evening following a call from the traditionally pro-Russian leftist and communist parties Syriza and more protests followed on Saturday.

The shock waves of its neighbor’s invasion of Moscow reverberated beyond Europe.

In Argentina, Ukrainians and Argentines of Ukrainian descent were among some 2,000 people who visited the Russian Embassy in Buenos Aires on Friday.

They chanted “Glory to Ukraine, glory to its heroes” and the national anthems of Argentina and Ukraine.

Among the crowd was Tetiana Abramchenko, who moved to Argentina with her daughter in 2014 after Russia annexed Ukraine’s Crimean peninsula.

“My most important feeling is anger,” the 40-year-old told AFP, holding back tears. “The last thing I imagined was Russians coming to kill my people.” 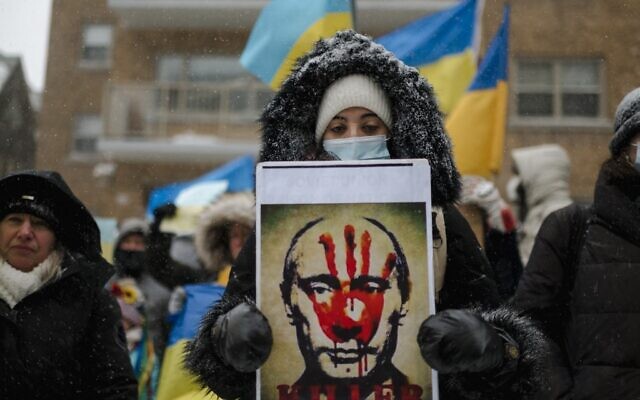 A woman holds a portrait of Russian President Vladimir Putin with a bloody hand to her face as members of the Ukrainian community demonstrate outside the Consulate General of the Russian Federation in Montreal, Quebec, February 25, 2022. (Andrej Ivanov / AFP )

In Canada, dozens of demonstrators braved a snowstorm in Montreal to protest outside the Russian consulate on Friday afternoon.

“I am against this war. I hope this is the beginning of the end of this regime,” said Russian Elena Lelievre, a 37-year-old engineer.