Soccer powerhouse FC Barcelona will host a pre-season match in Israel against Beitar Jerusalem over the summer.

The match is scheduled to take place at Teddy Stadium in Jerusalem on August 4, a day after the team landed in the country.

Beitar, one of Israel’s top football clubs, finished third in the Premier League in the 2019-20 season.

Jerusalem Municipality will host the match and the team is expected to visit holy sites in the city, Hebrew media said. New president Isaac Herzog, who will take office in July, could meet the Spanish team during their visit, media said.

In May, before the recent fighting in the Gaza Strip between the IDF and the terrorist group Hamas, the Spanish team were in talks to play in Israel. But the hostilities – which ended in a ceasefire on May 21 – reportedly caused reluctance within the club to visit Israel at the time.

By registering, you accept the conditions

Illustrative photo of the Teddy stadium in Jerusalem during an international football match, October 10, 2015 (Flash90)

If the August 4 game comes to fruition, it will be the first time Barcelona have played a pre-season game in the country.

The team, led by Argentinian superstar Lionel Messi, played a friendly match in Jaffa in 2013 in front of a crowd of young Israelis as part of a two-day â€œpeace tourâ€.

Messi also traveled to Israel in 2019 for a friendly match between the Argentina and Uruguayan national teams, which saw him take on his then Barcelona teammate Luis Suarez. 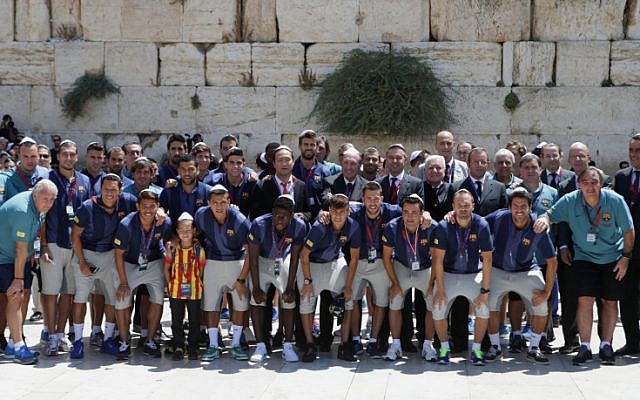 That match was also in doubt because of the fighting the week before the match between Israel and the Palestinian Islamic Jihad, the second terrorist group in Gaza after Hamas leaders in the Strip.

The year before, Argentina and Messi were scheduled to play against the Israeli national team in Jerusalem before traveling to Russia for the World Cup, but the team canceled the trip at short notice after intense pressure from the from Palestinian officials and activists.

Beitar is one of the country’s most famous franchises, winning 13 trophies and counting Israeli presidents and prime ministers among its fans. But he has also drawn negative attention for being the only major club never to have an Arab player. Israel’s Arab minority makes up around 20% of the population, and Arab players play on rival teams and the country’s national team.

Club officials have in the past said their hands are tied by an unconditional base of far-right fans who wield considerable influence over staff decisions. A small group of fans, known as La Familia, are known to scream like monkeys when an African player from an opposing team touched the ball and chanted â€œDeath to the Arabsâ€ to opposing Arab players.

Are you serious. We appreciate this!

We are really glad you read X Times of Israel Articles in the past month.

That’s why we come to work every day – to provide discerning readers like you with must-see coverage of Israel and the Jewish world.

So now we have a request. Unlike other media, we have not set up a paywall. But since the journalism we do is expensive, we invite readers for whom The Times of Israel has become important to help support our work by joining The Times of Israel community.

For as little as $ 6 per month, you can help support our quality journalism while benefiting from The Times of Israel WITHOUT ADVERTISING, as well as access to exclusive content reserved for members of the Times of Israel community.